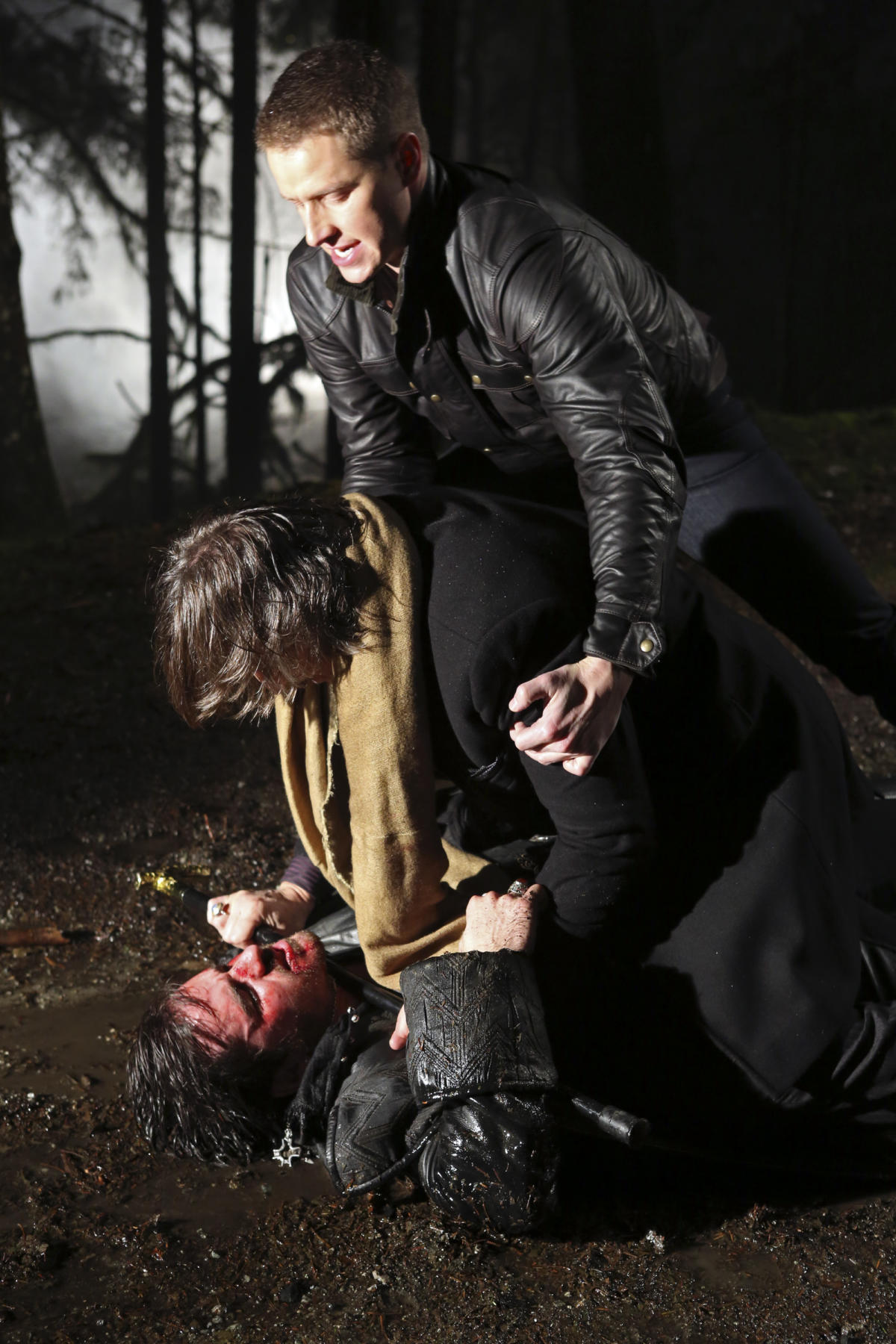 Days after Mary Margaret’s death, there were funerals, Emma and Nile suffered the worst of all the others, David was also no exception, he was great pain on his heart and it is hard at the thought that it was he who did not have time to save his wife, unexpectedly, Rumpel sat down to David.

— Have you come, here to rejoice? — David asked directly, with a proud look.

— Do not flatter yourself, this day I will be glad that I finally got married, but! to my joy, you unfortunately not be able to rejoice unlike me — Rumpel replies, with a smile on his face .

— Surprisingly, thanks for the support — Rumpel finds no other words and sits down at another table.

— Crocodile! small conversation — said Hook — I advise you to stay away from Charming, in extreme cases I will kill you — Hook was about to get up but the pirate couldn’t do it because of Gold’s witchcraft.

— Buddy, you should go to your barrel! as I already know, she misses your care — Hook looked, into Rumpel’s eyes.

— Then, wait for the not too pleasant consequences thee Cillian Jones, moreover terrible — David quickly approached Rumpel, then put his hand on the back.

— Yes, simply I so many years want to give someone in the face — David ked askance at Hook.

— Your jokes no needed now, let’s do without them — Hook chuckled at the prince’s words.

— You starting to stand up for the magicians?! — Hook asked, everyone it’s right away heard — and I thought, with you macho.

— Now is not time, Cillian! — David forces Rumpel to stand up, from which he left the café with him.

— I not the first, been to help people which were more serious situations, good bye — Rumpel nodded, suddenly something hit the magician in the back.

— There’s something stuck in, this thing kill me, pull it out of my back!… — David looked where Rumple was looking and saw Jones ahead, he was standing with a gun in his hand and was clearly angry.

— Tick-tock, crocodile — said Hook, Rumplestiltskin was able to get to his feet a David stood in front of him.

— This is unlikely… get out of the way, I don’t want to hurt you — said Hook and pulls the trigger.

— Killian stop! you need his death, а if and need it why? — David asked.

— He killed my love, well, then I’ll kill you -Hook answers and takes one step.

— Look, I understand your feelings and I know, that you can’t wait to do this… but after killing him, the anger will not go away — David explained — hey, he’s not worth it — Hook changed his look, slowly lowered the gun and threw it into the darknes. All of a sudden. A ball of fire hits Jones in the face causing him to fall to the ground, David looked at Rumplestiltskin and then crouched down to the Hook.

— Quiet, just lie — David held on to the pirate’s leather suit and tried to calm him down, Rumplestiltskin threw Charming away from Jones with magic and he landed in a puddle.

— A I thought that after so many years, you would become smarter — Rumple sat on the Hook and presented a cane to his throat — but you are the same as before — David began to run to the Hook to help- goodbye, pirate! — said Rumplestiltskin.

The magician began to strangle the pirate.

— How many years, I’ve been waiting for this moment and finally waited — said Rumple- a now, I’m take your life…

— Stop! — David shouted and threw Rumplestiltskin off the hook — everything will be fine, hold on — said David.

— Wrong, got you in my way for nothing! — Rumplestiltskin magic, quickly lifts David up and also quickly makes him turn to him.

— Please, no — Hook said through groans — Rumplestiltskin listened to the words of the pirate and looked at Charming.

— Captain Hook has fallen in love again, what should I do with your lover? — Rumplestiltskin asked, David noticed Emma and decided to stall for time.

— Come on, kill me! what stopping you magician?!… you didn’t regret Mila, so do it with me! I not afraid of death — David said,  prince began to choke.

— I’ve had enough of this nonsense,» said Rumplestiltskin.

— I have to say, the same for you! — Neil hits his uncle on the head and the magician passes out from the blow, David landed on the ground, Hook lifted.

— I fine, how’s Killian? — David asked, Emma saw Hook get to his feet and start walking towards them.

— He’s alive, get up — Emma lifts her father to his feet, David glanced at Hook.

— Thank you, for not letting him kill me — Hook said.

— You were unwise, I could not fail to have time — David exhales heaviness — I need to take you to the hospital, Emma… take care of Rumplestiltskin and don’t let him escape, Neal, the safety of Storybrook lies you — David said to his children.

— Something is wrong, my head is spinning -Hook suddenly loses consciousness, David managed to catch him under the back.